I had an awesome idea today for revamping my unsold fantasy trilogy, Mages of Mâvarin. I’m very excited about it.

(Please note: This was originally posted on Tumblr, where it will mostly be seen by Doctor Who fans who have no idea what Mâvarin even is. (It’s a fantasy country in an alternate universe, geographically located in the eastern U.S.) But the Tumblr entry will be picked up by Twitter and Facebook, and here I am reposting on Blogger, which will also hit FB. So much duplication, and maybe two or three people will end up reading it. But it’s worth it.)

Anyway, here’s the background. I recently finished editing my first novel, Heirs of Mâvarin, and am gearing up to submit to agents and publishers. Meanwhile, I recently reread the sequel, Mages of Mâvarin, cut one scene and added another, and called it done except for tweaking. The difficulty with Mages is that it’s over 300k words long, long enough to be a trilogy. So years ago I broke it into three volumes, with vague stopping places in the overall narrative, sort of like Tolkien did with The Lord of the Rings. An Adept in Mâvarin would set up the several plotlines, Another Mâvarin would get Our Heroes in even worse trouble, and Return to Mâvarin would complicate things further and then resolve all the plotlines, more or less. 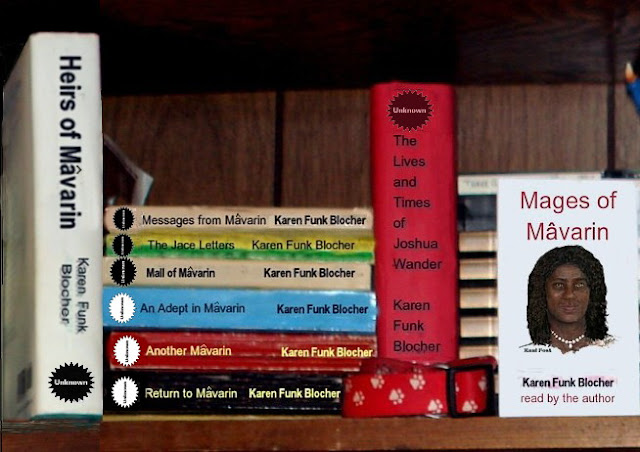 I want my bookshelf to look like this!
But here’s the idea I had today. Instead of breaking Mages chronologically, with none of the volumes truly complete as novels, what if I made the three books concurrent? The first book would cover Rani and Darsuma’s storylines, the second would be about Fayubi, Fabi and Temet, and the third would focus on Li and Prince Talber. Each novel would begin on the same day, and each would end on the same day, and some events would be retold from different points of view, as Moorcock did with Corum, Hawkmoon etc. This way, each book tells the whole story of what happened to those particular characters, and stands alone as a complete novel. At the same time, each novel provides context for the other two.

This will be a really interesting writing exercise, and may even make the books more marketable. Here I go, starting right now! Hooray!

But yes, I’ll be submitting Heirs in the meantime.

Posted by Karen Funk Blocher at 11:02 PM No comments: