This is a map of Thâlemar that I drew over the course of a couple of hours, about a month ago: 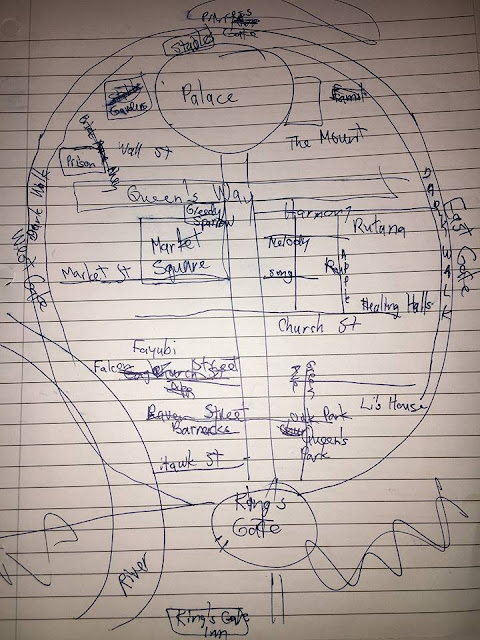 This is the rough draft of Thâlemar that my good friend Sara Cosgrove drew for me in a couple of hours today. 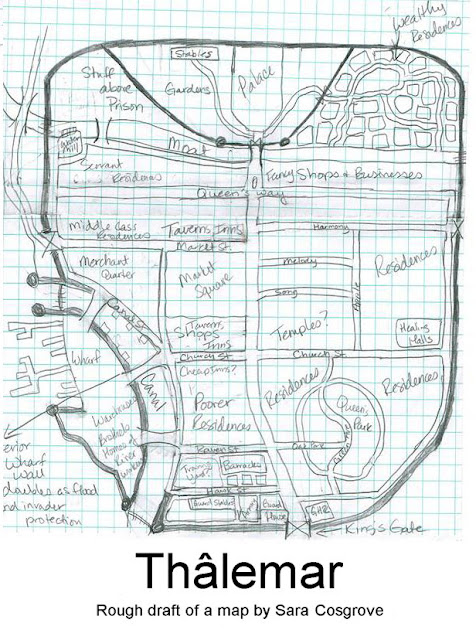 The differences are startling. Mine looks like a child's drawing. Hers looks like a map. Beyond that, Sara's map shows a lot more thought being put into how cities work: who would live where, what businesses would exist, how to deal with shipping and flooding and siege and...well, you get the idea. I can't tell you how pleased I am. Sara asked me a bunch of questions that made me think about details and logistics, and then drew something that answered questions I would never have thought of!

Also, I bought a personal Wiki app called Trunk Notes. The darn thing doesn't stay connected to my computer for more than a couple of minutes at a time, and the iPhone data doesn't talk to the iPad data unless I sync first one and then the other to my computer. You're supposed to be able to sync with Dropbox, but I failed to figure that out. I mean, I'm sure I could conquer it eventually, but it was far from obvious how to do it from the instructions given.

None of the formatting from the Word files I imported were carried over into the Wiki formatting, and the numbered scenes in my outline defaulted back to 1, 2, 3 at every chapter or dating break. I didn't see how to add tags (a place for them, but not an icon for adding them), and the way the links work is weird. At this moment I'm not at all sure I'll keep it. I may take another stab at OneNote or Evernote, or make do with M.S. Word.

Sara's map, though, made my day!

Posted by Karen Funk Blocher at 9:26 PM No comments:

Written as a comment to a writing exercise on the Science Fiction and Fantasy Authors group on Facebook. It's based on an actual incident at Old Fort Henry when I was a small child.

"When I was about six years old," Rani said, "my mom took me to the first big Market of spring down in Mashelamar. I think she was trying to expand her clothing sales beyond Liftlabeth into the big city. It probably worked, because she has lots of clients there now." He looked at Cort. "Did you ever see her there? She used to go a couple of times a year."

Rani took a long look at his father. Cort seemed disinclined to elaborate, so Rani continued his story. "Anyway, this one time, she took me with her. And I lagged behind, looking at a stall full of pinwheels and tops and wooden horses. Then I realized I was alone, and I ran to catch up. There was a pale woman up ahead in a blue dress, and I thought it was Mom, so I ran up behind her and asked if she'd buy me a toy. Then she turned around."

"And it wasn't her," Cort guessed.

"Not only that, but she spoke to me in some language I didn't recognize. Maybe Parsai. That's when I started to get scared."

"Did the woman help you find Rithe again?"

Rani shook his head. "No. It was a man who helped me."

"Why are you telling us this story, Rani?" Meligor asked.

"Because of the man. He was dark like, like both of you when you look human, like me when I was human. He took my hand, and bought me a pinwheel to stop my crying, and then he helped me find the right woman in a blue dress. 'Run to her,' he said, so I did. When I looked back, the man was gone."

Cort nodded, but said nothing.

Cort shrugged. 'Maybe. I've reunited a few lost children with their parents over the years. Were you one of them? I don't really know."

"Now you've reunited Rani with his father and grandfather," Meligor said. "That counts for something."

Cort shook his head. "No, I didn't. Rani did that himself."
Posted by Karen Funk Blocher at 10:02 PM No comments:

I am determined to finish Heirs of Mâvarin this year. It's lots of fun to go over it and over it, and tinker and tinker, improving the wording and catching the occasional typo; and there are times when I add or overhaul whole scenes. The books get better and better as I do this, but there's obviously a problem. At some point, I have to concentrate on coming up with a final version of each chapter and each scene - or, at least, as final as it's going to get before being turned over to an agent or editor, one last time. Leonardo Da Vinci wrong, "Art is never finished, only abandoned." I really believe that. At some point a piece of art needs to be pushed out into the world and abandoned, to be discovered by others. 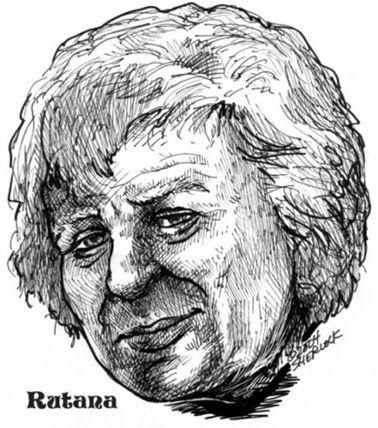 But I'm not quite there yet. There are still a few scenes to be written, a few improvements to be made. For example, in re-reading a Patricia C. Wrede novel last week, I realized that not one character in the Mâvarin books, aside from the people in the Palace, has even one servant. Is that realistic for my society at this stage in its history? It's true that I've more or less consciously created a milieu that was far more egalitarian than most historical, pseudo-historical and fantasy realms. Have I overdone it? Probably. Certainly Rutana, an elderly mage in uncertain health who lives alone in a fair-sized house, needs and deserves a servant to help her out, at least a few days a week. She'll get one. And here's a related point. Can she afford a servant? What does she do for a living? If she's retired, where did she make her money before that? So I've had to figure that out, not just for Rutana but for Fayubi as well. Robert Young's character in Father Knows Best rather famously had no apparent job or source of income. I don't want that sort of stumbling block in the way of my books' verisimilitude.

Another current project is to figure out the geography of Mâvarin's capital city, Thâlemar. I had about five named streets, but only a vague idea where they were in relation to major landmarks and to each other. I'm no mapmaker, but I will have to make a map. And just tonight I finally decided the name of Rutana's street, and Fayubi's street, and the Ramets' street.

What's the point of all this? It goes back to worldbuilding, and Damon Knight's comment to me, many years ago now, that he had the impression that my world "ends ten feet from the road." I've come a long way since then, but I have just a little farther to go, I think. Once you know that Rutana's housekeeper Etha leaves Harmony Street just before noon each Market Day to buy Rutana's groceries, including fresh apples in season and Derion chocolate whenever possible, the world becomes that much more real. I hope so, anyway!

Karen
Posted by Karen Funk Blocher at 8:23 PM No comments: