Beneath the Orange Sky

I'll get back to the other stuff eventually, but meanwhile here's a special treat, cross-posted from the Outpost. With closure, even!

Into the Land of Shadows

Vicki of the blog "Maraca" is responsible for this week's Round Robin topic, "Shadowland." This is going to be my most ambitious RR entry to date, not so much photographically as, well, you'll see. 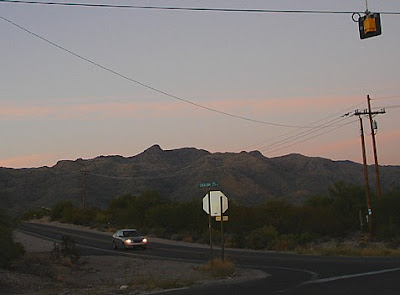 Beneath the Orange Sky
by Karen Funk Blocher

They rode toward the mountain side by side, Rona Sable on her horse, Apple, her grandfather Seth on Chub as usual. The oncoming sunset did not pause in its approach, unlike several of the cars that passed them, heading toward the city as the two horses left it behind. While they were still on the long, flat highway, Seth played his favorite game with Rona, asking her questions about stars and planets, brains and botany. Rona answered dutifully, but she was not in the mood for it. Her whole body throbbed with tension, not just from the long ride, but with anticipation. She looked no more than seven years old, but today was her thirteenth birthday. Tonight after sunset, her impossibly youthful grandfather would finally tell Rona the secrets that had been withheld from her, all her life up to now. 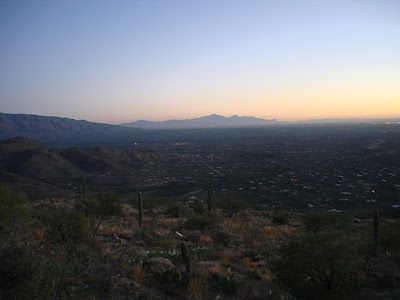 Once they reached the base of the mountain, Seth lapsed into silence. They directed the horses carefully along the narrow shoulder, lest they miss their footing in the gloom. Ten feet to the right, the drop was at least a hundred feet, and increasing with every step. 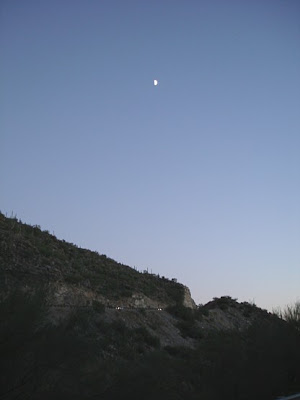 "How far are we going?" Rona asked after a while. "This is getting dangerous."

Her grandfather did not answer immediately. Then he said, "Yes, it is. But for now we're riding only as far as the first vista point, another three miles or so." 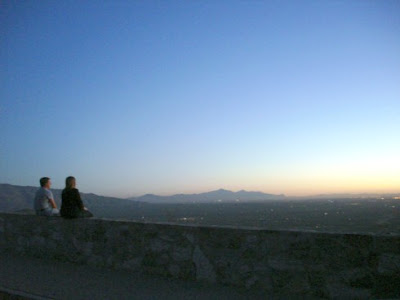 Sunset was starting to fade as they turned right onto the looping drive of the Frog Mountain vista. A couple sat on the wall between the paved parking and the drop toward the valley below. Rona knew her grandfather would not want to tell her anything interesting with strangers around, so she wandered along the stone wall, taking pictures with her new camera.

"Point the lens this way," Seth said in her ear. 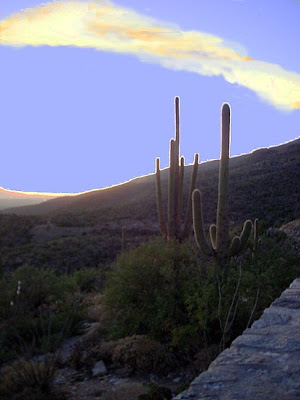 Rona aimed her camera in the direction her grandfather had indicated, over the wall onto a path that went past of couple of mature saguaros. Beyond the cactus, and over the foothills themselves, the LCD viewfinder revealed a light in the sky, arcing over the blue, like a cloud but not a cloud. Rona glanced away from the camera, but her naked eye revealed nothing. 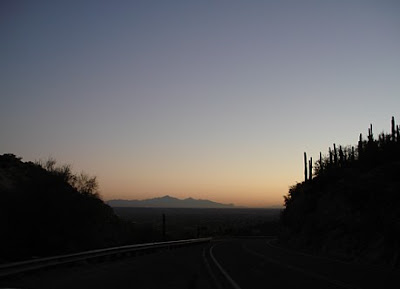 When she turned back, the couple were getting in their car. "Finally," her grandfather said. "Now, look that way. See the mountain over there, where there's still an orange glow? That is where we are going."

The more Rona looked, the less sense Seth's statement made to her. "From here? Tonight?"

"Yes, from here. Look, that's the way down, over by the two saguaros. Take Apple's bridle and follow me."

Rona protested even as she obeyed. "But why from here? That mountain is down beyond the airport. Half the city is between us and it. And it's getting dark."

"It won't get dark. Not quite. And now that we've passed the boundary, we're not where you think we are. There is no city, until we reach that mountain."

"Wait and see," her grandfather said. 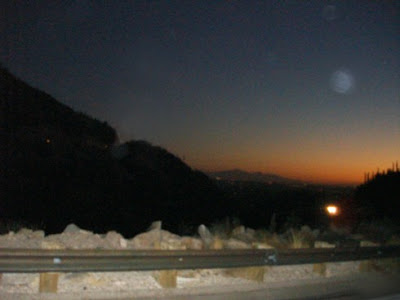 Five minutes later, the switchback they were following turned suddenly onto a disused section of road, where no road ought to be. Below was a flare of light, but it was not a set of headlights. The sky ahead of them was more orange than before, and the ghost of a full moon was in the sky, although Rona knew it should only be a half moon. By its light and the distant orange glow, she found she could see every pebble, every bramble. The horses plodded along the dark pavement.

"Welcome to the Shadow Kingdom," her grandfather said. "While we're here it will never be daylight, but it never quite gets dark, either. "Look behind you." 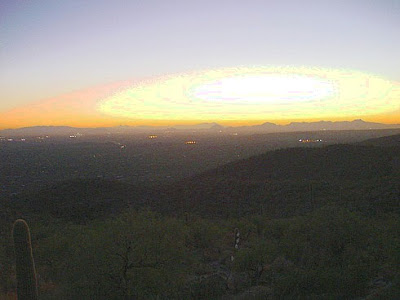 Rona looked. Behind her should have been the looming mountain, but instead she saw a valley and the twinkling of lights. A yellow glow fringed the horizon, and a much brighter glow above that seemed to hold back the night. "What's that? It almost looks like, I don't know, a bomb or something."

Seth shook his head. In this strange light he looked slightly older than usual, perhaps a year older than his students at PCC. "It's the interface between the world you knew and the one we just crossed into. It's not visible from the other side, except sometimes through a camera lens, when the two worlds come together at dusk. But on this side it's the primary light source. You won't see the sun again while we're here."

"How long will that be?"

"Until you come of age."

"What does that mean? Until I'm eighteen, or twenty-one? Or worse yet, until I look twenty-one? That could take decades."

Seth smiled at her. "It won't be like that. It's the sunlight that slows down our aging in the other world. Here you will finally start to age normally. And no, we're not waiting for you to reach some arbitrary age or stature."

"What then? Am I supposed to go and prove myself in some way, so I can be admitted to some strange tribe? Or engage in ritual dreaming? Or kill a deer with a stone knife? Does this world even have any deer?"

"Mutter's Grey deer. And no, you don't have to hunt them, although some do. You're here to complete your education."

"Haven't you guessed? This is your home, the land of your birth and birthright. The things you need to learn, you can only learn here. Your mother will teach you."

Seth smiled at her. "Of course."

"Did anyone ever tell you that she was?"

"You know better than to assume things. Observe, hypothesize, and test. But in this case you don't need to. I had a message from Mana, just last week. She's looking forward to seeing you again."

"Truly," Seth assured her. "Now come on. It's time we were riding again. The horses see this road as well as you can, and we've a long way to go."

Full of wonder, Rona climbed into the saddle, and rode on into the endless orange twilight. 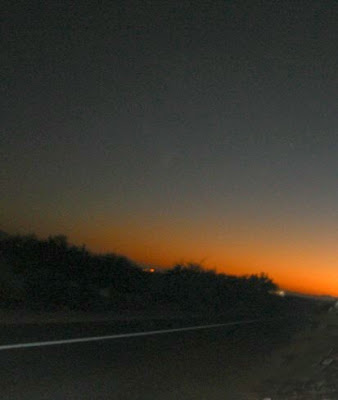 Posted by Karen Funk Blocher at 4:15 AM