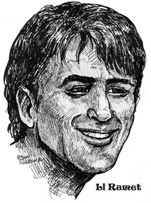 Part Fourteen: Cathma and her friends meet Lee Ramirez, the American who inherited Li Ramet's magical talent for understanding and being understood in any language. With Lee's help, the Americans and Mâvarinû compare notes. It turns out that they all know their situation: Their spirits and consciousness have now been transferred into each others' bodies. Lee confirms that his counterpart, Li Ramet, is involved, and should arrive soon with the remaining affected people.

Part Sixteen: Randy arrives, confused and half-feral. Rani calms him down, and gets him to come back inside the castle. Once inside it, he is able to understand and be understood in words. Although he admits to enjoying the tengrem condition once he was fully immersed it it, he doesn't want to take Rani's place forever, and experience the kinds of horrors Rani has lived through. After exhorting the others to find the source of the leak between worlds, Rani and Randy sit down together to try to exchange minds and spirits, thus putting themseves back in their original bodies.

Despite the importance of what Rani and Randy were trying to do, Cathma knew better than to sit around watching them do it. “The other Rani once told me that there’s nothing more boring to watch than a mind-reader at work,” she said. “What about this leak? Does anyone here know where it is?”

“Well, it was in the mall, obviously,” Cathy said. “Does that mean that the Mâvarin end of it is right around here somewhere?”

“It would have to be, wouldn’t it?” said Jamie Barrett. “How else would parts of the mall’s stores have gotten here? Not to mention our American bodies.”

“Yes, but that’s all physical travel,” Fayubi pointed out. “Our minds and spirits clearly traveled farther than that, at both ends of the transfer.”

“Still, it seems reasonable to assume that the physical and intangible movements took place through the same portal,” Shela said. The Americans all felt the change most strongly in the mall, just as we identify most strongly as our counterparts when we are outside these castle walls.”

“There’s no need to speculate, you know,” said Lee Ramirez. I know exactly where the portal is.”

“I do. Didn’t I tell you I was there when Li Ramet arrived at Shoppingtown? I saw exactly what happened.”

“He was experimenting with the Otherworlds spell, trying to find a way to keep different versions of the same people from becoming too much a part of one another. That’s been a problem in the past, you know. But it backfired, and had the opposite effect. Li started remembering what it’s like to be a poli sci major at Syracuse University. And then when he saw me outside Penney’s—”

“Why don’t you let me tell the story, Lee?” said a voice in the doorway. It was the same voice as that of Lee Ramirez, but a little more cynical and bitter. Li Ramet walked in, dressed in jeans and a t-shirt. Behind him were at least a dozen more Americans in Mâvarinû clothes. Cathma looked with interest at the new arrivals, most notably the alternative Tilen brothers.

“Well, well,” Li said. “Looks like the gang’s all here. Shall we get started?”

Use the sidebar of this blog to get to earlier installments and other past fiction.

Posted by Karen Funk Blocher at 3:34 AM