Crossposted from the Outpost: 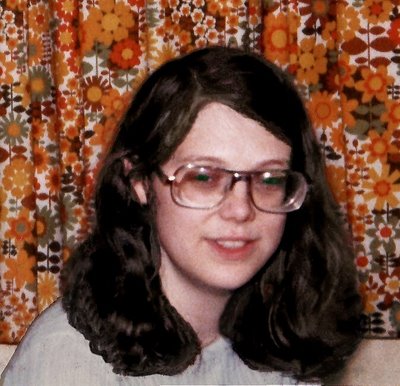 Here's the result of my silly project of the evening: a photograph of Ariel Allegra. You may remember her as the interdimensional traveler who brought Black Rose Kate here for a visit on Halloween night. Ariel is the 20-year-old daughter of a wizard and a ghost - at least, that's the short version of who they are. Ariel has black hair like her father, but it's less curly. Her eyes are green, and occasionally they glow a little.

"Yes, yes," Ariel says impatiently. "They can see for themselves that I have black hair and green eyes, even if you didn't catch them glowing. What else are you going to tell them about me?"

"Well, I mentioned your parents."

"They're my parents. I asked what you have to say about me personally."

Ariel sees my hesitation, and pounces on it. "You don't know what to say, do you? You named my fictional counterpart nearly thirty years ago, but you still know practically nothing about me. You mostly think of me as a multidimensional taxi service for your pirate friend, and secondarily as Joshua Wander's only daughter. I think I'm insulted."

"All right, then tell me what you want me to know about you. And while you're at it, tell my readers."

Ariel chuckles. "That's one way to get out of it."

"Fine, we'll do it together, interview style. Fair enough?"

"Troublemaker. First question: do you really attend something called Croatoan College, as I wrote at the end of Mall of Mâvarin? Or is that apocryphal?"

"Meaning you've been to more than one version."

"No. One version, multiple universes. "

"So you can't change which Croatoan College you attend, in case you get a bad grade or something?"

"There's only one Croatoan College. It's kind of hard to explain, but it vibrates through a whole series of similar timelines, so that it's accessible from all of them."

"What do you study there?"

"You mean, do I study potions with Professor Snape? No. There is a series of four courses in Applied Magic, but overall Croatoan has nothing in common with Hogwarts or Mâton or any other fictional school for wizards. We have comparative physics, and biology, and literature, all the normal courses other schools have, except that they take into account the variations among the worlds Croatoan touches."

"But who would go to a school like that? Wouldn't that curriculum be inappropriate for anyone other than a time traveler?"

"You mean an interdimensional traveler. Yes, it's a little weird, but it turns out there are quite a few of us. Plus Croatoan has a very good reputation. A number of heads of state graduated from there."

"Which reminds me. What about Carl and Cathy, the students who almost became Carli and Cathma? I seem to recall your mentioning them in a note to me. Do they really go to Croatoan with you?"

For the first time, Ariel looks a little embarrassed. "Ah, well, that was sort of a joke." I read about them in Mall of Mâvarin."

"To say that for sure, I'd have to visit every universe there is. But the Carl and Cathy I go to school with never traveled via shopping mall."

"I see. Is there anything else you'd like to add?"

"Yes. It's five o'clock in the morning. Stop watching the Benson marathon and go to bed."

"Will you still be here tomorrow?"

Posted by Karen Funk Blocher at 2:16 AM