This one is in reaction to another dream. it's based on a series of books I enjoyed up to the point represented by the dream, and found problematic thereafter. The remarkable thing about that is, as far as I know, those books don't exist, but are the product of some previous dream.

This is a fragment, of course, but I hope I can make it coherent enough to stand as a short story, or possibly the beginning of yet another serial.

Berelandra
Fragments from a Possible Work in Progress

Part One
There was nothing strange about the girl. That much was certain. She was a perfectly ordinary human being, young and healthy.

I should know. I examined her, and I'm a doctor. Or was.

Oh, her circumstances were odd, no question about that. She was an orphan, apparently about twelve years old, living alone in a small, abandoned hotel along the Bering Strait. There had been an older brother, apparently, but Cinda was annoyingly vague about where he had gone or what had happened to him. "I didn't follow him. I was afraid," was all she would say at first.

And the hotel itself didn't make much sense. Who would want to vacation up here, far from the cities and amenities, along a stretch of sea the cruise lines could not enter without going aground? There wasn't even that much wildlife here, just a handful of auks and puffins, and the occasional polar bear lazing around on still-firm ice. Their habitat troubles were a hundred miles further south, and the survivors of global warming had not yet reached this godforsaken place. So there was no reason for a hotel to exist up here, run by an English girl almost certainly unknown by the State of Alaska's child welfare people. There was no village or town for fifty miles in any direction, no road to anywhere, no possible clientele except a small party of scientists studying the geological, archeological, ecological and meteorological evidence for the one time existence of a land bridge here. Which of course was what we were.

Six days of helicopter surveys with infrared cameras, landing on a likely spot and chipping away at samples of permafrost had let us to this luxury log cabin, the sort of thing Frank Lloyd Wright might have designed. Its graciously open interior spaces made clever use of glass and wooden curtains to bring in the heat and keep out the cold in a way I didn't quite understand. But I liked it.

The kitchen wasn't as rustic as it looked, and it seemed well stocked. Cinda was at the stove, flipping pancakes for us. Her flip rate was remarkable. Each pancake was perfectly cooked through in just about a minute.

I was rather pleased with myself for thinking up the term "flip rate," as if it mattered how quickly one could change pancakes from pools of batter into nicely browned discs. Funny, that.

When our expedition leader, Eric, asked where the food came from, Cinda said, "Oh, Jerry drops it off, once a week."

Jerry was the helicopter pilot who had brought us here. He was supposed to return on Friday. This was Tuesday.

"How do you pay for the food?" Eric persisted.

"Oh, with these." Cinda wiped her hands off on a towel and walked to a locked safe next to a glass-covered cupboard. After a few rapid twists of the dial she reached in and pulled out several shiny lumps of yellow rock.

"But this is gold," Vince, our geologist, exclaimed. "Unprocessed gold, like what came out of the Yukon Gold Rush over a century ago. What is it doing here?"

"Oh, it's been here a long time, my whole life," Cinda said. Everything she said seemed to start with "Oh," as if every thought our questions precipitated was entirely new to her.

"How much of it is there," Eric asked. "If you've been spending it on food and supplies...."

"Oh, I don't think I should tell you how much," she said, "but enough to last a while longer. Years, maybe. It's worth it to be able to stay here." She put the gold away, carefully spinning the lock afterward.

"Why do you want to stay?" Vince asked.

"In case Jack returns," she said. This was clearly not a new thought for her. Jack was her brother. We had determined that much.

After breakfast, Cinda showed us a framed photo of her family. It was black and white, and looked like something out of the 1950s or earlier. Everyone wore fur, in the style of a previous generation, and grinned at the camera as if in acknowledgment of a game of dress-up.

"What happened to your parents?" asked Lucy, the team's cartographer.

"They went out on the ice, a long time ago," Cinda said. "They never came back. Later Jack went looking for them. He never came back either, but I've seen him. Several times. He wants me to go out there with him, but I won't do it."

At this point I suspected that Cinda was somewhat delusional, but she was so matter of fact about everything that I wasn't certain.

"Why did your family come here in the first place?" I asked.

"Oh, they were looking for a place to have the baby. Me, I mean. I guess the sled dogs were lost or something. Then they found this hotel, and the sign, and figured this was the place to stop." 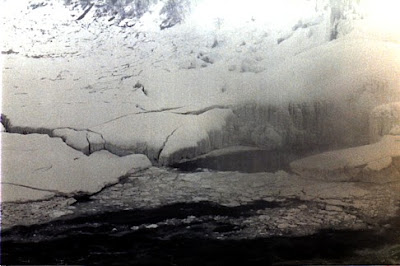 She led us outside, to a bed of ice immediately behind the hotel. The summer sun made it almost blinding, except for deep blue shadows, well beneath the surface. The numbers and letters they formed were so precise they could have been etched by lasers: "1929 BERE 2009."

"We see it, but we don't understand," Eric said. "Why would that influence your parents to settle here?"

"Well, it's my family's initials," she explained.

"Oh, well, that's because of the nicknames. Jack is really Richard, but he didn't like that name, and Call of the Wild was his favorite book. So he's Jack. And my real name is Ella. Get it? Cinda Ella?"

I suppressed the groan that escaped the lips of several of my colleagues.

"What do the numbers mean?" I asked.

"Oh, they're years. The year my family first got here, and this year. The year I leave, maybe."

"You think we won't let you stay?" Eric asked.

Something in the sky changed. Blue became another color, gold maybe, like Cinda's nuggets. Something flashed in her eyes, and she shook her head. "I don't think it matters. The sky has changed, and I don't have to wait here any more. I think we're all leaving now. You're the people I need to help me."

"Help you do what?" Lucy asked.

That's when the flipping began.

To be continued. Maybe.

Posted by Karen Funk Blocher at 2:37 PM No comments: