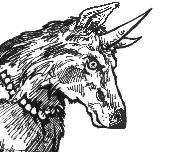 Gee, has it been so long? It's been nearly four years since I last wrote on this blog, positing an experimental reorganization of the trilogy Mages of Mâvarin. I gave up on that particular idea after about a week.

Since then, all my blogs have fallen by the wayside, my social media presence has mostly been on Facebook, and much of my writing has been non-fiction as the newsletter editor and social media consultant (and bookkeeper, photographer, etc.) for St. Michael and All Angels Church. But just over a year ago, I joined a writing group, hoping to jumpstart my fiction writing again. If you live in or around Tucson and write sf or fantasy, feel free to join us: 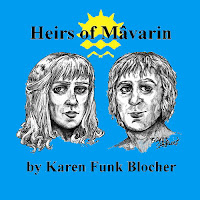 In the past year, I've gone back to the first novel, Heirs of Mâvarin, and revised the heck out of it. Now it's a trilogy of short novels instead of one really long one. The idea is that this configuration is easier to market than the longer first novel, especially if it ends up as an ebook.

To do that, though, I needed to restructure the first book in the trilogy. It was fine as the first third of a book, but it lacked the proper dramatic structure for a stand-alone novel. So a major character, who originally learned something important a hundred pages in, has to figure it out toward the end of the volume. Another character has to escape from a place, while the first character has to escape into a different place. Overall I think it's gone well, and I have the meetup group to thank for the motivation and feedback. Thanks, you guys!

The book's new opening is as follows:

Rani Fost set down the belt he was embossing and slipped out the front door of the deserted leather shop. Del was already in the stable yard next door, shading his eyes and staring in the direction of the river. He pointed. “There!”

Houses and trees blocked much of their view, but Rani spotted two riders, a man and a woman, barely keeping their seats as their horses neighed and plunged in fear of the large, dark creature that pranced in the middle of the normally quiet street near the lumber yard. Other hunters milled around, apparently trying to surround the creature.

It was the monster from Rani’s dreams, the one he had been desperate to catch a glimpse of in his waking life for the past three days. At first glance the tengrem could have been another horse and rider; but there was no saddle. Instead of a rider, the equine back sprouted a furry torso, like a bear on its hind legs. Two long, hairy arms ended in pink-clawed, five-fingered hands. The dirty yellow horn in the forehead was long and slightly curved.

The tengrem opened its wolf-like snout, revealing teeth so large that Rani could see them even at this distance. A moment later it spouted fire as a hunter ventured too close to the tossing head. The hunter’s horse shied as flame touched its legs.

The tengrem bolted for the woods that covered the hills at the village’s edge. The hunters shouted and plunged in after it. Rani and Del watched for a few moments longer, but saw no more of the quarry or its pursuers.

The Clarion Write-a-Thon starts in two days, and I'm thinking of participating. This fundraiser for the workshop, where I first met my husband of 36 years, runs from June 21 to August 1, the same dates as this year's workshop. (I'm pretty sure that my Clarion started on July 3rd, 1977.) Their website explains the What and How of it: 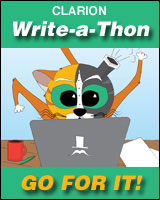 Welcome to Clarion UCSD's Sixth Annual Write-a-Thon! What is a write-a-thon, anyway? Think charity walk-a-thon. In a walk-a-thon, volunteers walk as far as they can in return for pledges from sponsors who make donations, usually based on the number of miles the volunteer walks. Our Write-a-Thon works like that too, but instead of walking, our volunteers write with a goal in mind. Their sponsors make donations to Clarion sometimes based on number of words written, sometimes based on other goals, or just to show support for the writer and Clarion.
All donations are made through The Clarion Foundation, a 501(c)(3) non-profit organization.

As I embark on my revision of Book Two of Heirs, should I make it a Write-a-Thon project? If I do, will you sponsor me? Better yet, will you join me?

Update: I signed up.

Posted by Karen Funk Blocher at 1:56 AM No comments: