That's another week I've managed to keep this going. I think we're coming into the home stretch now.--Karen

Part Seven: Cathy and her friends meet Joshua Wander, an interdimensional traveler who followed his mysteriously shrunken castle from Mâvarin to Shoppingtown.

He claims to have no knowledge of the others' predicament, although a policeman who remembers being the Captain of Cathma's Palace Guard is dubious about this. Josh's castle has arrived looking a quarter its normal size, and his magical abilities are severely reduced. As the stranded mage looks through a spell book for answers, Fabian asks if he can look at the spell that brought Josh to Dewitt. Although the spell is written in an unknown language that resists translation, Josh reluctantly hands over the book--and Fabian discovers that he can read it anyway.


Part Eight:
Fabian announces that the spell is written in Lopartin, the ancient, magical language used on Mâton. Although the spell's footnotes mention the dangers of two much traffic between worlds, it offers no help for the current problem. Based on a vision, Fabian correctly identifies Josh Wander as a former student of nearly Syracuse University. Josh is astonished (and not especially pleased) to learn that he's "home." Fabian speculates about whether this fact contributed to the leakage between realities, and everyone wonders what to do next. Randy advises everyone to simply "wait."

Part Twelve: When Cathy, Fabian and the rest emerge from Josh's castle, they become disoriented as the last of their memories of Dewitt fade, buried under their memories of Mâvarin. Before them is a portion of the mall, open to the sky and filled with dazed people. Josh points out that they are now speaking Mâvarinû, but Cathma does not remember speaking any other language, and doesn't quite remember Josh or the events of the day. She asks him to explain again who he is.

Part Thirteen: Joshua Wander explains again who he is and what he knows of the situation. With his borrowed talent for divination, Rani discovers that they are almost completely the spirits of the people from Mâvarin, but in the bodies of the Americans. This means that Randy Foster, wherever he may be, is a tengrem now, rather than Rani Fost. As the displaced people discuss the implications of this, a magic portal opens at the entrance to J.C. Penney, and their counterparts emerge through it. Rani/Randy is not there, but someone unexpected does arrive with the others. In appearance at least, he is former guardman and rogue magician Li Ramet. Rani accuses Li of causing the current situation. 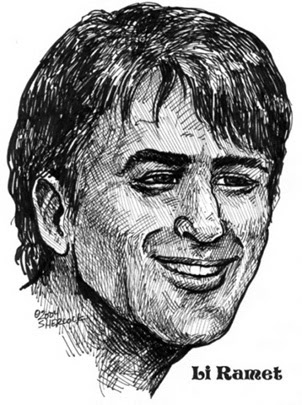 “Hey, don’t blame me for this,” said the young man with Shela (or Sheila). “I’m Lee Ramirez. The guy you want should be back shortly, once he tracks down the rest of the Americans.”

Carli frowned. “How does Li—Li Ramet, I mean—know where to look for them?”

“Well, most of us were pretty easy to find.” Lee waved to indicate the people with him. “The others here were in your capital city, where you people would normally be. I wasn’t, but of course Li would know where he’d just been.”

“How about the ones who weren’t in Thâlemar?” Carli asked.

“I think Mr. Stockwell helped Li find them. Something about a magic window.”

Fabian Stockwell smiled and nodded, but didn’t speak. Cathma returned his smile before asking Lee Ramirez a question of her own. “If he’s Fabian Stockwell, how did he use Fayubi’s mirror?”

“And if you’re Lee Ramirez, what language are you speaking right now?”

“English. American English. Would you prefer that I speak Spanish?”

Cathma said, “No, it’s just, how is it that we understand you, and you understand us?”

Lee shrugged. “Magic, I suppose, same as Mr. Stockwell and the window. And I’m the only one. The other Americans don’t understand a word of Mâvarinû, so I have to translate for them. But everyone understands me for some reason, and I understand everyone else.”

As if to prove Lee’s point, Fabian Stockwell spoke, in words Cathma did not understand.

“He says that it’s odd about the languages,” Josh said. “Logically, the knowledge of each language should be stored in everyone’s original brain.” Josh shook his head. “What he doesn’t realize is that magic trumps science in many of these worlds, or replaces it completely.”

“So you do all understand what’s happened to us, right?” Carli asked Lee. “Despite the language problems, you all know who and where you are?”

Cathma’s American counterpart asked Lee Ramirez a question. Cathma didn’t understand Cathy's question, only Lee’s reply to Cathy. “King Carli wants to know whether we know who and where we are.”

Cathy nodded, and said something else in English.

“She says she understands it about as well as anyone could, given the circumstances,” Lee said. “As for where we are, it’s rather hard to miss the fact that we’re not in Dewitt any more.”

“You never were in Dewitt,” Fayubi told him. “If Rani is right, then you’re technically Lee Ramirez in Li Ramet’s body. Cathy Ramirez is Queen of Mâvarin, and Sheila Crouse is a selmûn rather than part Iroquois.”

“Yes, that’s obvious from all the old scars Ms. Crouse has now, that she never had before,” Lee said. He looked around. “Is there someplace she can sit down?”

Sheila said something, and Lee replied, “That’s not the point. We should all sit down.”

“We should go back inside my castle,” Josh said. “There are still a few dozen people from Dewitt in there, and they’ll be wondering what’s going on. Besides, it may help you all with your, um, memories.”

“Fine with me, but where will everyone sit?” Cathma said. “I didn’t see very many chairs in there.”

“I can do something about that,” Josh said.

“Okay, let’s do that,” Lee said. “We should leave a note out here for Li Ramet, though. By the way, he has been to Dewitt before, body and all. That’s how all this started.”

Rani looked at him curiously. “How do you know?”


Use the sidebar on this page to get to the individual installments of this serial and other past fiction.

Posted by Karen Funk Blocher at 2:04 AM