Much as I like my piratical house guest, I fervently hope that whatever deus ex machina brought her to my doorstep last week will swing by soon to take her home. I'm convinced that if she's here much longer, she'll return to her life of crime - 21st Century style. At the rate she's been learning to use my computer, I can see her getting into the identity theft racket before the year is out, just in time for Christmas. Or she might relocate to Nogales or Douglas, and smuggle drugs or people or both across the border from Mexico. Even armed robbery wouldn't be beyond her, once she upgrades from her flintlock pistol to something semi-automatic. She might opt for the relatively easy money and better odds of the border and tech crimes, but, well, I'm not sure. It probably depends on how bored she gets.

In any case, I don't want to be around when she starts getting in trouble with the law here in Arizona. I already had to do some fast talking at LensCrafters the day she got her new glasses. It wasn't enough that I spent $214.87 on her anachronistic glasses; she had to get light-fingered on me, too. I managed to convince them that she simply "forgot" to put the sunglasses back, but I may have to shop elsewhere from now on. Incidentally, Becky, Kate deliberately chose glasses that were as different as possible from the spectacles she was used to. In fact, she went for ones that looked a lot like mine! When I asked her why, she explained that the old wire rims were inadequate to her lifestyle, and that she wanted to take advantage of our modern technology. "I cannot tell you how many glass lenses have popped out of my spectacles during a fight or a storm, and landed in the sea," she said.

Other than Halloween at the office and a few other shopping expeditions, Kate has mostly stayed in my house while she's been here - or so she claims. I'm fairly certain she sneaks out, though. I've seen food around here that I didn't buy, and that John probably didn't buy, either.


I've done my best to distract Kate with tv and computers, but it's clear that my DVD collection won't keep her cooped up and entertained much longer. Kate said when I got home tonight that she can't sit on our old orange couch for another day of watching video - not even for Buffy the Vampire Slayer, her favorite.

So I took her to the gym with me tonight. That was interesting. I left Kate upstairs on the treadmill while I went downstairs to meet with my trainer. As it turned out, though my trainer wasn't even there! He'd gone out of town (again), and hadn't given me a head's up. So instead I showed Kate some of the machines downstairs. She wasn't kidding about being in better shape than I am. She uses a lot more weight on both the upper and lower body exercises. I didn't get much work in myself - I was too busy watching her!

After that we went to Wing Factory, where she ordered the three-alarm wings. I got barbeque ones as usual for myself, and garlic parmesian for John. While we were waiting, Kate trounced me on the Hook pinball game, even though she'd never played it before. Figures! It is a pirate game after all, and I'm no Peter Pan. 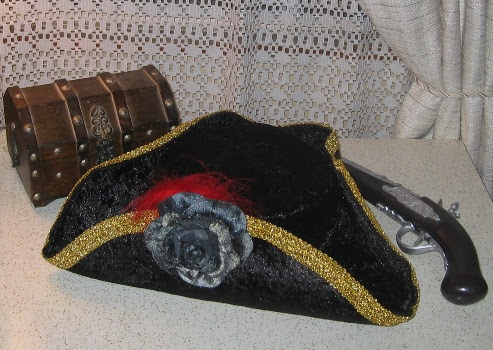 Tomorrow I plan to take her up Mount Lemmon, so she can get the heck out of the house and into nature, and I can keep an eye on her. Kate agreed to leave her hat and pistol home, and go incognito, in more of my borrowed clothes. I would consider this is major concession if I didn't think she was doing it for her own purposes rather than mine. She's probably trying to blend in enough to learn what she can without arousing suspicion. As for the weapon issue, well, I strongly suspect that she's already gotten her hands on a knife at least, or possibly a handgun.

Meanwhile, Kate has gotten some work done on the story of her life, writing in longhand in one of my newer Mâvarin notebooks. It would be nice if I could get her interested in writing for a living instead of crime, but that's not going to happen. "You've been writing for thirty years, and you still don't make a living at it," she told me today in that forthright way of hers. "What chance have I of doing so? Better to stick to what I know."

And that's the problem, isn't it? For all of her charm and eloquence and candor, Kate is still a criminal at heart. Whether she dresses like one or not, she'll always be a pirate.

Posted by Karen Funk Blocher at 2:31 AM