I'm in danger of catching up with my handwritten draft here. I'd better get writing! 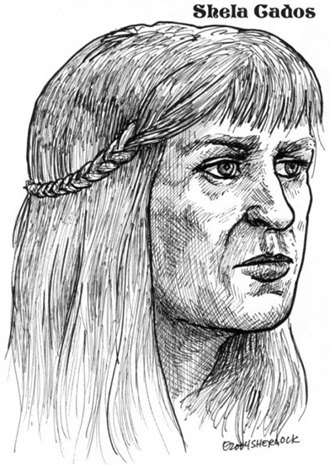 Part Three: Cathy notices that some of her teachers are also behaving strangely. Even she experiences odd thoughts and memories as the day wears on. At lunch, Randy tells Cathy and Carl that the impressions of another life that people are receiving are tied in with dreams he's had about a country called Mâvarin, in which Cathy and Carl are Queen Cathma and King Carli. Randy has begun writing down the dreams in story form. Randy's main worry is that in the dreams, he's a monster. Carl suddenly remembers what kind of monster Rani Fost is in Mâvarin: a tengrem.

Part Four: Carl starts to remember a life in Mâvarin, and Cathy soon realizes that the same is happening to her. Randy, who hasn't confided in anyone else but Mr. Stockwell, the psychology teacher, is deeply worried that he is turning into a tengrem. Cathy and Randy hope to discuss the situation further with Mr. Stockwell, but the teacher is absent. However, he has left a note for Randy that implies that Mr. Stockwell also remembers another life--as Fayubi the Seer, Mâvarin's royal mage. Carl insists that Randy should come along to Shoppingtown Mall with the twins after school.

Part Five: Cathy, Carl, Randy and Uncle Jami are increasingly overwhelemed by memories of Mâvarin as they approach Shoppingtown. Inside they meet Fabian Stockwell, who tells them that that the source of the influx of otherworld memories (and spirits of their other selves?) is somewhere in the mall. Randy may hold the key to restoring their identities--but Randy has gone feral, his tengrem instincts aroused by the sight of rabbits in a pet shop.

Part Six: Lost at the Mall

“Rats. He’s gone,” Cathy said. “Carli—I mean Carl—do you think you can get through to him?”

“I’ll be right back,” Fabian said. The schoolteacher-mage sprinted off toward Penney’s, of all places, leaving the others standing with the half-feral teenager.

“Randy, listen to me,” Carl said. “Never mind the rabbits. You don’t need them.”

“There’s better food than rabbits,” Carl said. “Wouldn’t you rather have pizza?”

“If this were fiction, I would call your friend’s condition an obvious metaphor for alienation and adolescent hormonal activity,” said a voice behind them. Cathy turned. Randy’s creative writing teacher stood there, professionally attired in a blue dress and yellow belt. Despite Ms. Crouse’s dark hair and complexion, Cathy now recognized her as Shela Cados, the twins’ and Rani’s selmûn mentor. “I would also find selmûn dialogue to be annoyingly stilted,” she added. She did not smile at the self-criticism.

The teacher’s arrival served to distract Randy from his fascination with the rabbits. “Shela!” he said. “How did you know to come here?”

“As I drove toward Syracuse after school,” the teacher explained, “I became aware that my otherworld memories and perceptions grew more intense in the vicinity of Shoppingtown. It seemed reasonable to investigate.”

“Does that mean that if we got far enough away from here, we’d feel like Americans instead of Mâvarinû?” Jamie asked.

“I suspect that it would merely retard our mental transformations, not reverse them,” said Sheila Crouse. “It would not solve the underlying problem, or help other people who are affected by this. Eventually, everyone on the planet who has a Mâvarinû counterpart might find it difficult to function in a technology-based culture.”

“That’s assuming we all forget how to Google and so on,” Carl said.

“That is not the only issue,” Sheila said. “There is also the question of sanity. These unlikely memories may threaten the mental health of some people, and cause the institutionalization of others, whether they need psychological treatment or not.”

“Speaking of which, here comes Fabian,” Carl said. The psychology teacher could be seen hurrying back from wherever he’d just been.

“I doubt that a psychiatrist can solve my prroblem,” Randy said. “Much less a psych teacher.”

“You may be surprised,” Fabian said. He was a little out of breath. He held up a J.C. Penney shopping bag. “I have something here that should help.” He opened the bag and extracted a string of chunky white plastic beads. “I know that this doesn’t look like much, but I bought it from Barry Ramirez.”

“Who is Barry Ramirez?” Cathy asked.

“He works in the jewelry and watch department at Penney’s. You know him as Barselti.”

Now that Fabian mentioned it, Cathy did remember Barselti. He was Li Ramet’s brother, a transformation mage who also did some undercover work.

Randy looked doubtfully at the necklace. “And this is supposed to keep me from becoming a tengrem? It’s not even made of real stones.”

“You’re not a real tengrem,” Fabian said. “These beads are to keep you from thinking like one.”

Randy shrugged, and slipped the necklace over his head. It disappeared beneath his Yellow Submarine T-shirt. He took a deep breath. “We’ll see,” he said. “I think…I think I feel a little better.”

“We find the source of the problem, and we deal with it,” Cathy said. The others all looked at her. “Somehow,” she added.

“Well, as long as you have a specific plan,” Carl said.

The mage-school teacher led them upstairs to the main floor of the mall. Large numbers of people were going in the same direction, most of them without shopping bags in their hands. Many of them appeared to be deliberately following Cathy and Carl. Cathy thought she saw the Tilen brothers in the crowd, dressed in contrasting Hawaiian shirts, and Suri Pelch, dressed in jeans and a flannel shirt, looking around him in fear and wonder. Cathy practiced her smile of royal assurance as she walked on.

The nexus of the mall was a small open area, where concession carts were seasonally pushed aside to make room for Santa Claus or Easter Bunny photo operations. Today the carts were displaced by something else entirely: a tiny blue castle, perhaps twenty feet high, like the central landmark of a miniature gold course. A middle-aged man with dark, curly hair, wire rim glasses, a pointed hat and an outfit that was more Hogwarts than Mâvarin sat cross-legged in front of it, reading intently from a thick book with a brown leather binding. Half a dozen police officers stood nearby, in animated discussion with a man in a gray business suit.

Cathy approached the man with the book, followed by Carl and Randy. This drew the immediate attention of the police. One of them reached out to prevent a younger officer from trying to deter Cathy from reaching the guy in the wizard outfit.

The man looked up from his book.

“Hello,” Cathy said. “Are you responsible for all this?”

Past installments of this and other fiction are on the sidebar.