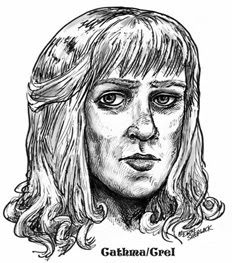 Del's gone. He galloped off into the forest tonight on Pandar, along with Shela the selmun Wanderer and the tengrem that supposedly killed Rani. I'm sure Del had a reason for doing it--not a good reason, maybe, but a reason. It's hard to figure out, though, what that reason could be. The note he left on Uncle Jamek's desk said that he and Shela were going to find Rani and help him. How are they going to do that, when Uncle Jamek and Jord and Bil and Shela and the others already looked everywhere, and found no trace of him except his pocket knife?

And why, in Thâle's name, would they keep company with a half-sentient monster? I would have thought that maybe Del and Shela were chasing the tengrem to try to make it tell them where Rani is or what happened to him, but it didn't look like that. The tengrem called to Del, and Del followed it. The tengrem wanted them to accompany it. Why? Did it promise to take them to Rani? If so, why didn't Del pause long enough to tell us that? Instead he just turned and galloped away, as if we were his enemy and the tengrem was his family!

Del's note said that he and Shela would probably be gone for several days, so I'm not surprised that he's not back yet. It's nearly dawn, so he's been gone all night, in dangerous company. Where did they go? Odamas? Thalemar? Some dark, secret place where the tengrem could kill them without the bodies ever being found?

If Del gets himself killed, I'll never speak to him again.

Such a typical teenager! But she is asking the right questions. she sounds like a teen and a concerned twin. Her journal is a handy literal device to keep someone on track just in case they haven't asked the questions themselves.