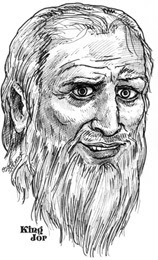 From The Memoirs of King Jor:
Chapter 12: My New Home

It wasn’t really a palace. I knew that as soon as I saw it. I never quite forgot that bitter truth--almost, toward the end, but not quite.

The less-than-palatial building before me was made of wood, probably oak, not stone or brick. The single tower on top was short and boxy, and tilted a little to the left. Worst of all, Calezundi had ordered some tengremen to paint the whole thing an unnatural bright pink. I could tell that tengremen had done the work, because several of them had left tufts of blond and brown and black fur in the paint.

To be honest, I didn’t really care that the fake castle in the middle of Gathmak was meant to mock me. The important thing was that it was a building, with walls and a roof and not so much getting wet if it rained. After many weeks on the back roads of Mâvarin, my hands tied together, the only full human in the company of tengremen, a roof and walls represented a definite improvement.

It was true that I would still be a prisoner, but what of it? I had nowhere else to go, not any more. My wife was dead. My children (so I thought) were dead. My cousin Richi had died of a fever three years before, and his sister, Bete, had married the king of Fãrnet at a time when Mâvarin’s order of succession had been less in doubt. Now there was only me, and I no longer deserved to rule Mâvarin. Why not stay here, I thought, and let Nishi Awer rule in my place? He would do no worse than I at the job.

My captors laid a foot-wide wooden board across a sludgy green moat. I started across it alone. Strange eyes peered up at me from the moat. The eyes lay atop the head of a twenty-foot-long green monster I later came to know as Monte the alligator. I walked to the end of the board as steadily as possible, until I came to a wooden platform in front of an unpainted door with crooked hinges. I stepped off the board, and the tengremen pulled it away. (Years later, Canda and Cort built me a real drawbridge for my birthday. It wasn’t terribly big or especially well-made, but it was better than the board.)

I opened the door. It was rather dark inside, but I saw an armchair and a bed, and a small bit of brown that was probably a rug. The chair was on a little platform, like my old throne in Thâlemar, nowhere near as nice-looking but, I hoped, more comfortable than the real seat of power.

Well, I guess I’m home, I thought, and went inside.